Ah, swearing, cursing, abuse. Where would we be without it? I’d probably lose half of my scintillating conversation.

But as writer of historical  romances, it’s not always easy. I’m not the kind of writer who likes to use clinical words like penis or vagina, but words like dick haven’t been around that long. Well, they have, but their meaning has changed over the years

For example, the word ‘fuck’ has been around since 1502, according to the OED Historical Thesaurus of English.  But it was nothing more than a vulgar word for, um, fucking until 1874. Telling someone ‘don’t fuck with me’ literally meant ‘don’t have sexual intercourse with me’, which doesn’t have quite the same punchy implication.

Dick didn’t mean penis until the nineteenth century, and even then it had crossover with other slang terms, like detective. I’m sure we’ve all sniggered at vintage writers like Enid Blyton naming characters ‘Dick’. (I had a bit of a chortle recently when I read The Black Moth and Richard’s wife constantly calls him ‘Dickie’—I’m sure it was adorable when it was written, in the 1920s.)

So what’s a poor historical writer to do?

Well, you could ignore it, and let your characters bump dicks and bang pussies with abandon, as well as tell every cocksucker to get fucked or sod off. I love the dialogue in Deadwood and Black Sails where modern curses danced cheek to cheek with ye olde speak.

But I find it really tough to do something I know is so far out of period. I do hate being pedantic sometimes. Not that I’m that pedantic; if the thesaurus tells me a word was first recorded in use at 1720, I might push it back to the mid 1600s. My reasoning is that in the days when language changes took years to spread rather than becoming instant memes, vulgar words were likely to have been in common usage for some time before anyone bothered to write it down. Maybe I’m reaching, but whatever.

And while I’m on the pedantic topic, I’ll segue to something almost related. I find it staggering how few words there were for oral sex prior to the nineteenth century when you compare them to the number of words for shagging. Some historians have hypothesised that oral sex is a relatively modern phenomenon (ie from the nineteenth century). After it fell out of favour with the fall of the Roman Empire, that is. They give various reasons—lack of hygiene being a big one, but I figure if everyone smells as bad as you do, and your street is an open sewer, would you really notice? Another reason given is that oral sex was considered sodomy and therefore a criminal act. I doubt criminality stops anyone from doing anything pleasurable, and I have previously waxed lyrical on the overt and covert existence of sodomy in society for the last two thousand years despite it being criminalised. In any case, whether or not it was rampant among our forebears, I’m not going to deny my characters the awesomeness that is a good spigot-sucking. 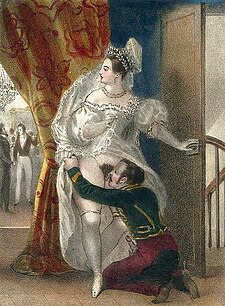 Darling, I have a yen to go larking in your thatched cottage

One of my favourite sources for historical sexual euphemisms is timeglider, which has a series of timelines showing when vulgar words and phrases for sex etc came into use. These are based on the work of the awesome Jonathon Green, the famed slang lexicographer. Here are links for:

It’s a fine line between historical accuracy and modern appeal. Use too much modern terminology and phrasing, and you lose the historical feel. Use too little, and a modern audience won’t be able to connect with it. While colourful, ‘Avaunt, you beslubbering flock-pate’ doesn’t quite have the manly impact of ‘fuck off, arsehole’; and ‘Begad, Lizzie, let me diddle your lady-ware and you may ride my rantipole’ may not encourage readers feel that heaven’s in the backseat of Mr Darcy’s barouche.